How Metro Connectivity will Increase the Property Price in Electronic City Bangalore? 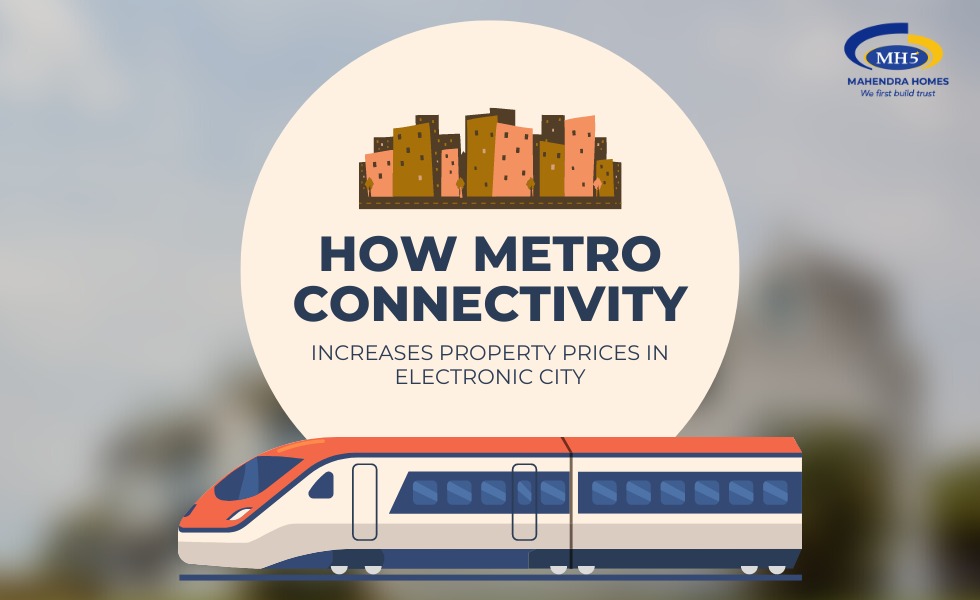 Bangalore is a rapidly developing city. The evolving infrastructure has increased the demand for the sale of flats in Bangalore.

The bustling economic hub, Electronic City, is proof of this demand since it is one of the most preferred areas in Bangalore for homebuyers. Founded by Keonics, this area offers affordable residences with high-end amenities.

The major attraction of Electronic City for many home buyers is the easy connectivity to major parts of Bangalore and the proximity to educational institutions and commercial centres.

We have great news for homebuyers looking to invest in Bangalore realty!

Phase 2 of the 128 km Bangalore Metro rail network is expected to be operational by 2024. This part will cover Electronic City and make commuting much more convenient.

It indicates that property prices will rise exponentially across Electronic City once the metro line is functional. We can predict this property appreciation through previous data.

For instance, during the construction of the Bangalore Metro Phase 1, flats for sale in Bangalore located along the metro corridors saw a price appreciation of 22-30%.

Furthermore, post-construction of Bangalore Metro Phase 1, the price appreciation further escalated to 6-10% for residential projects (built or under construction) along the metro corridors.

Moreover, locations such as Magadi Road and Yeshwantpur along the metro corridor saw a capital value appreciation of 20 to 30% compared to areas not connected by the metro.

In addition, the improved connectivity further improved the overall infrastructure with the construction of new tech parks and commercial centres.

The metro now covers other significant areas such as Electronic City, Nagawara, Yelahanka-Kogilu, and Jakkur. This aspect increased their popularity for investment in residential apartments in Bangalore. These locations have further benefited dramatically with a hike in rental rates by almost 15%.

Such prospects in these industrial locations have evolved into the most in-demand residential zones with the development of several premium apartments in Bangalore.

We all know the prominence of IT jobs and tech parks near Electronic City. But, despite 90% of the IT jobs being in areas like Electronic City, Whitefield, Outer Ring Road, and North Bangalore, there is no metro connectivity.

The proposed Metro Phase 2 will completely transform the landscape. We have already discussed the impact of Phase 1 metro connectivity on Bangalore realty. With Phase 2, the metro network will boost the connectivity quotient of Electronic City, improving the commute.

So, the ease of accessibility via the metro will attract more and more homebuyers along with new and better residential units along the corridor, increasing population density in the area. Therefore, creating new residential pockets for under-construction projects in Electronic City to take off.

There will be a high preference for ready-to-move-in units. Still, prelaunch projects in Electronic City are more likely to grab homebuyers’ attention, given new amenities and discounts. The rental market will likely garner traction in the Electronic City, with an expected overall increase of 20%-25% in rentals.

We know that Electronic City has had an excellent track record with some of the best residential projects. So, the prospects for both the builders and homebuyers seem bright with the new addition of the metro line on the Electronic City map.

In addition, the planned infrastructure of Electronic City will further play a significant role in boosting commercial and residential infrastructure along the metro line.

Now is the perfect time to invest in any under-construction or prelaunch project in Electronic City and leverage the high ROI with y-o-y appreciation.