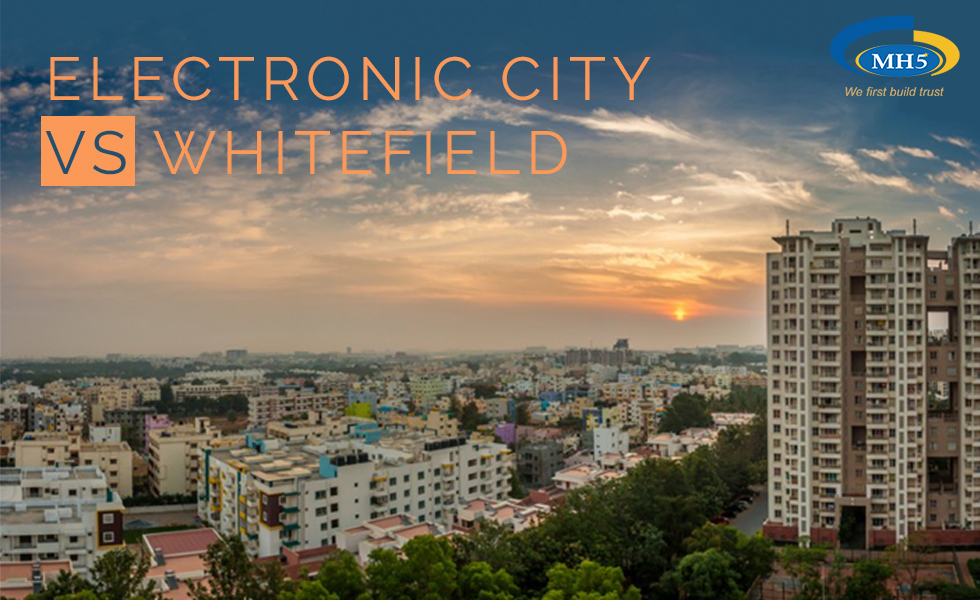 After scouting tons of residential apartments in Bangalore, most I.T employees are left with two choices which are Electronic City and Whitefield: two areas that even a non-Bengalurean would know; all thanks to the booming I.T sector there. We here, at Mahendra Homes receive quite a lot of queries regarding these two localities as it is not an easy task to choose between these both. Both the areas are fast developing in terms of infrastructure and connectivity and it is said that at least 80% of I.T employees work either in Electronic City or in Whitefield. To help ease your confusion, we have curated a list to make your decision easier.

Electronic City is unparalleled when we are to talk of connectivity as it is situated on NH4 connecting Chennai and Bangalore and has an expressway with six lanes for increased accessibility. To reduce traffic congestion, the Silk Board flyover is coming up which would also reduce the commute time. It has been estimated that by 2022, the area will be part of the Namma Metro Line 3 thus enhancing connectivity to parts of Phase-1 and Phase-2 of Electronic City.

Whitefield is connected to major sectors of Bangalore via Whitefield Road and Varthur Road. According to the Traffic Management Report which has been carried out by the Directorate of Urban Land Transport, it is Varthur Road which faces more congestion due to which the traffic time is doubled.

With excellent connectivity, well-developed infrastructure and competitive capital and rental rates, apartments in Electronic City are fast being seen as a hotbed of investment. The average capital values have gone up by 7 percent and stood at 4600 sqft the previous year while Whitefield stood at 5700sqft the previous year with a 6 percent jump in its average weighted capital. A major part of the housing demand is split into its neighbouring areas like ITPL and Varthur due to the competitively priced properties thus limiting the probability of capital appreciation.

If we are to talk about the growth potential among the properties of the two locales, the properties in electronic City definitely score higher. Both areas have consistently been featured in the lists of areas with extremely high rental growth.

Electronic City is well developed in terms of infrastructure with international schools like Treamis, Feathertouch etc along with noted hospitals like Narayana Hrudayalaya. It is also all set to get its first integrated mall namely M5-ECITY, a project of Mahendra Builders.

Whitefield is famous for its breweries and varied malls to ensure that every day is a weekend for you.

To conclude, be it Electronic City or Whitefield, it all bottles down to factors like your personal aspirations and requirements. If you are looking for an area with an extremely high connectivity and high rate of growth, Electronic City would be a perfect choice. Additionally, if you are seeking a location to suit your child’s needs as well, an apartment in Electronic City fits the bill owing to its proximity to some of the best schools in Bangalore and is equally popular for recreational facilities for children.