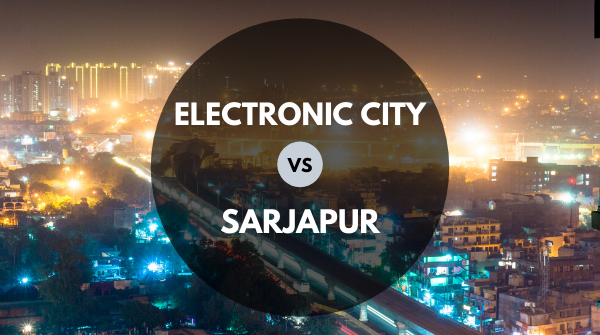 So, is it the super-cute 2BHK flat in Electronic city or that apartment on Sarjapur Road? Which one is going to give you a better deal? Both of them are fast-growing localities receiving a lot of love from the I.T employees due to an MNC or an I.T company opening every other day! There are pros and cons for both so which one makes the cut?

After talking to a few of our close aides and industry experts, we have reached a conclusion so worry not, for we are here to help you make a decision. Read on!

The upcoming yellow line of the Namma Metro in Electronic City is going to be a boon to its residents on account of improving connectivity and help ease the traffic woes. Your daily commute would be reduced to nothing once the metro is introduced. This gives a huge edge to electronic city over Sarjapur Road and which is no wonder, there has been a rise in the upcoming apartments in electronic city.

Also, Electronic city has the advantage of the Elevated Expressway which has helped reduce the commute time to a matter of minutes for individuals who have invested in the apartments in Electronic city. The Peripheral Ring Road Project for which the residents of Sarjapur are excited about may have to wait for a while as there is a bit of resistance from the farmers over the land acquisition rates.

Electronic City is comparatively cheaper than Sarjapur but offers more facilities on account of the growing number of I.T companies due to which the government is focussing on developing the area even further.

To conclude, both areas have their own pros and cons and depends on a host of other factors like proximity to your work-place, your child’s school etc. Currently, Electronic city is considered ideal not just for residential purposes but also as a hotbed for investment owing to the growing number of I.T companies and the amenities it provides. Mahendra Homes, one of the city’s leading project developers having had the experience of constructing several 2BHK and 3BHK flats in Electronic city is a name to reckon for.  They are known for their tasteful interiors and flats that give you the sense of living in an independent house owing to the abundant green spaces. They have very few flats for sale in Bangalore electronic city with most of them having been sold out.  So don’t wait and book a visit today!